skip to main | skip to sidebar

Managed to get the pictures. Think i did quite well, quite pleased with myself. 11 pictures in all . 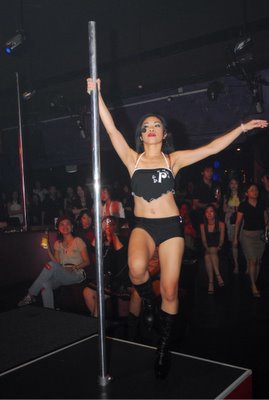 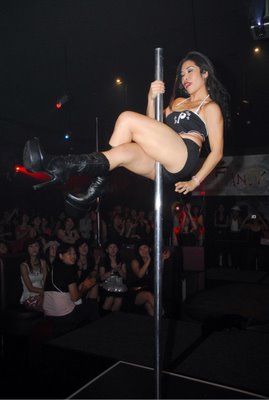 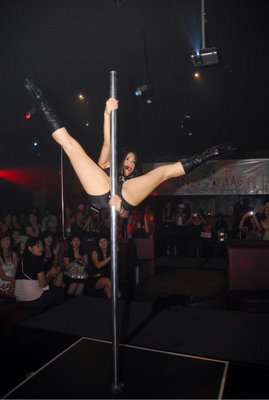 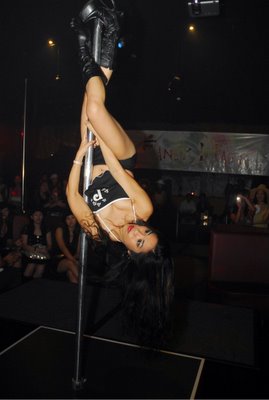 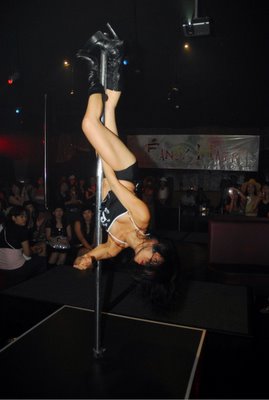 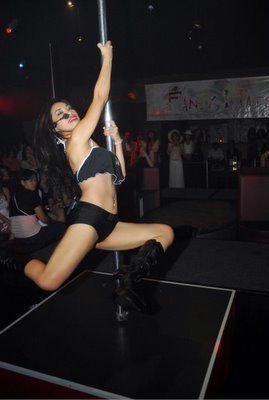 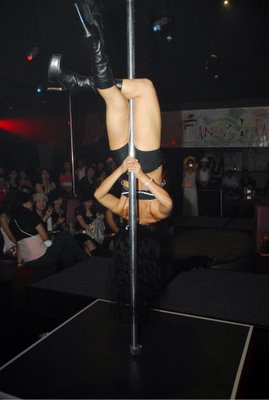 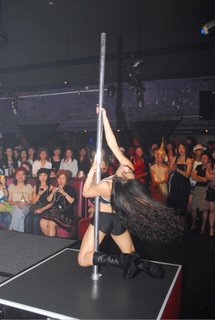 How? Can join the circus? Not bad la huh? Can't wait for back to fully recover and learn more stunts. Anyway, kudos to Mr Sia my dedicated physio therapist!

More pics can be viewed from my website www.suziewong.com.sg

ONE MORE TO GO!

Ok, thankfully, did a good pole dance last Friday despite my back. The boo-boo and hence the irony was, i was supposed to sing and dance, and so you know if i try to do both things i can do less pole stunts since the focus is halved, but due to some mis-cue of the music, my DJ ended up playing the music track from the original singer (not the miuns 1) and so i didn't have to sing and it became a POLE DANCE ITEM....as in, i only have to dance.....wah stress! So i poured out and executed every pole stunt I had ever learnt from class and managed to pull out a full pole dance performance! But the good thing was, hey, i realised i can perform a complete pole dance item almost like a pro! Haha. The pictures probably available later, trying to get from the photographer.

Oh, yes, the event was held at Club Momo and my guests had a ball from 7 to 11pm. They had their own staff perfomance and this is Ms Tina 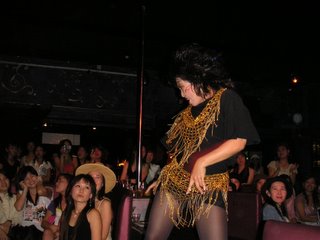 After 11pm, Club Momo had their own pole dance semi-finals. Managed to capture 2 of the better contestants.

This girl did the invert which i just mastered recently. Very good for a lean girl like her. 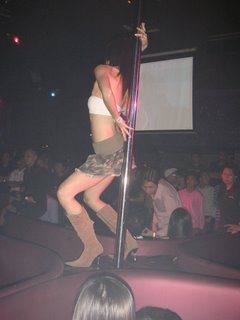 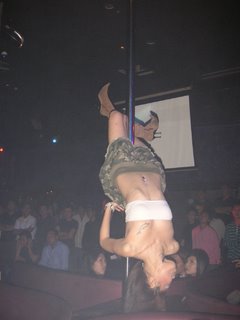 The second girl, obviously the crowd favourite is more....i mean a lot more voluptuous. And i give her 10 points for her looks, curves and endowment. Even her name is very ....hmm.....sensual...Dada. 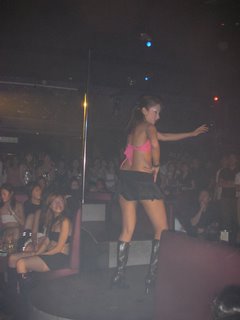 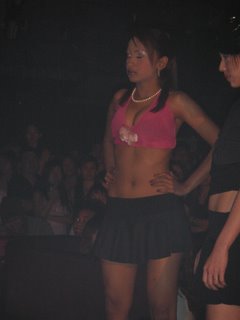 She did some pole stunts too, but it was her dynamic and energetic dance steps that wowed the crowd. Anyway i didn't stay for the results as i had been in the club for 6 hours, time to leave. Anyway last nite i had a nite off, so went to watch Kumar at the Gold Dust. Silly me was so tickled by Kumar's jokes I forgot to take pictures. I love the stage set-up, it was better than when in boom boom.
Tomorow got 1 more pole show before i can really rest my back, but i must say, it's a lot better already. Thanks to physio therapist.
Posted by Suzie Wong at 8:10 AM No comments:

BACK STILL HURTS A BIT

Stress, tomorow got pole show already, back still hurts! So tempted to try my new trick...... ok, shall try 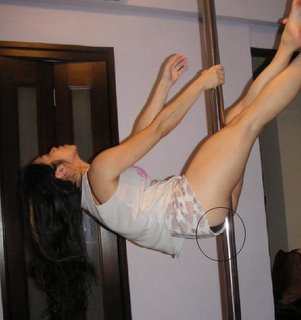 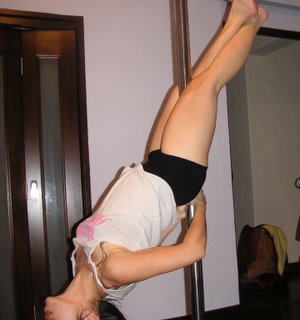 
there........ picture cannot see my face because camera set on self-timer. 10sec to set camera, run to pole, pull myself up mid-way the pole, drop back and wait for camera to click. Hee! Wah, back still hurts a bit! Sista, me preparing for next AAS. Hee!

LOOKING FORWARD TO SOME BREAK IN MARCH

Just tahan about a week more and i should go back to more humanly schedule.... and have time for some R&R! As if i'm currently not busy enough, I have to hurt my back and currently visting a physio therapist every other day to ensure my back is good enough for my 2 pole performances this weekend! Already some hurt ligament and last weekend i had 2 belly-related performances. Was careful not to jeopardize but inevitably would have introduced some trauma with all the moving about! Sigh, can't deny that age is catching up!

Anyway, i must say the therapy sessions are somewhat a blessing, I learn a lot more about proper stretching before exercises and dance and will not take my body (after all, not young anymore) for granted. Previously i would just chin-chai chin-chai do and get over and done with but now i will endure the warm ups more. Also, like what meow meow told me "stripper money boh ho tan -not easy to earn"....hahaha, not that i have to strip, but many strippers actually pole dance! So the next time you see a good pole dancer (those who do stunts lah, not those who just yo-lai-yo kee), please give them a standing ovation!

ANOTHER LINK FOR YOU TO ENJOY

No, not another suzie london, but you people enjoyed that, right? Now another nice link for you. My, what some people would do for fame, but this girl is damn chio and she has a nice ass. You can't decide whether she is sweet or sexy. But the video can't hear her sing, so i'm wondering what her voice is like, but the choreo is enough to drive all the men gaga lor! From her looks, I think she has the "lau su ai da mi (mice like rice) kinda voice but i may be wrong. Her goes : the sweet siren

Anyway, some great news to share, I have secured a couple more pole dance shows and some clients loved the video and have paid a premium for it too! Woo-hoo! Actually 1 more client was interested but i was taken up for an MC job liao! I'm so excited about it, except that i have to try to get back into good health soon. Have been ill for a week and hurt my back, but now recovering only after 2nd course of anti-biotics. Anyway, thanks meow meow for the opportunity to debut at her event and video the performance, we will celebrate with more cakes! But make sure that will not cause my abs to disintegrate into one (meow says can see 4 squares start forming around my abs liao-haha-must see very closely lah)
Posted by Suzie Wong at 1:00 PM 3 comments:

Since me still too busy to update anything, just thought i will quickly show you this link i stumbled upon which is very interesting. If it doesn't being you there, perhaps you can go to www.suziewonglondon.com Wah! you think i ever have to resort to this?
Posted by Suzie Wong at 12:00 AM 6 comments:

Phew! Still managed to put the dance together, happy to have attracted some "oohs & aahs". In fact I made small changes to my routine. I used to use the veil, now on top of the veil, i cut 2 more smaller pieces (like hankerchief) from the same coloured chiffon veil, sew finger loops, hung some weight at the end of the hankerchiefs and slipped one on each of my fourth finger. So when half way through the dance i shed my veil, it exposed the 2 hankerchiefs and when i did some turns and hand movements, the hankerchiefs added the much needed fluidity which i lacked. Haha, clever not? Actually Ms Sin L, as you probably guessed it, it was inspired by the poi.

Actually this event was themed Bollywood. As i was MC for the evening, they wanted me to do a belly dance segment (yah, i know belly middle eastern).

How's my attempt to look bollywood? Hmm...not very successful huh? anyway this skirt really bought from serangoon and the entire get up that comes with the a micro mini heavily beaded top cost me about $400 plus, but the top was too small (??) , so i wore this top instead, bought from bangkok
Posted by Suzie Wong at 4:05 PM 6 comments:

.... yes, to Ms Simone, Ms 3A gurl, Ms Anonymous Meow and another Ms(?) Anonymous, Ms Sin Lady (no comments on this thread but she sms me seomthing sweet) you are all so very lovely....very very encouraging indeed....and yes meow, only you know of the off-beat clapping...bwahahahaha.

I told my beloved sister to log on to see my pole, I think she too shocked to say anything....when i asked her, she thought i looked 'sleazy'...ahahahaha..... sister!!

Anyway, tomorow i have to perform a short belly dance, not sure if i still can do that, have been building my upper body (arms lah) so much think i neglected my lower (hips lah).

Cheers to all you beautiful people.
Posted by Suzie Wong at 2:42 PM 5 comments:

Believe it or not, I just debutted my pole dance performance and this other female entertainer whom i know of and happened to have seen my performance has already spread word that HER new show will incorporate "exotic dancing". I don't want to speculate, but i think she had had not changed her act for the past, say...5 years? So, why only now?

Pole dance IS a form of exotic dance, but we not talking about just dancing here (pole dance is not new anyway), but the whole show concept with a show sequence, audience interaction and all. So, I hope she won't disappoint me and better have something original up her sleeves than to use what i have invested lots of time, sweat and thoughts to put together.

Anyway, it's a new year afterall and i shall not be so worked up (i have other reason to be PMS, my colleague on urgent leave and we all blur about her work that seem so urgen,t and she UNREACHABLE!) .

Ok ok, for all my loved ones and friends, once again, GONG HEI FATT CHOY. Hope you all love, live, play and earn well.
Posted by Suzie Wong at 8:34 AM 5 comments:

Suzie Wong
I'm a performer, singer actually.But along the way i picked up belly dancing and pole dancing and now i try to fuse all my skills into my performances. This blog essentially chronicles my favourite performances and the happenings along the way. Thanks for visiting and hope you enjoy Email me suziew@singnet.com.sg if you want to be in touch with me about my pole-fession